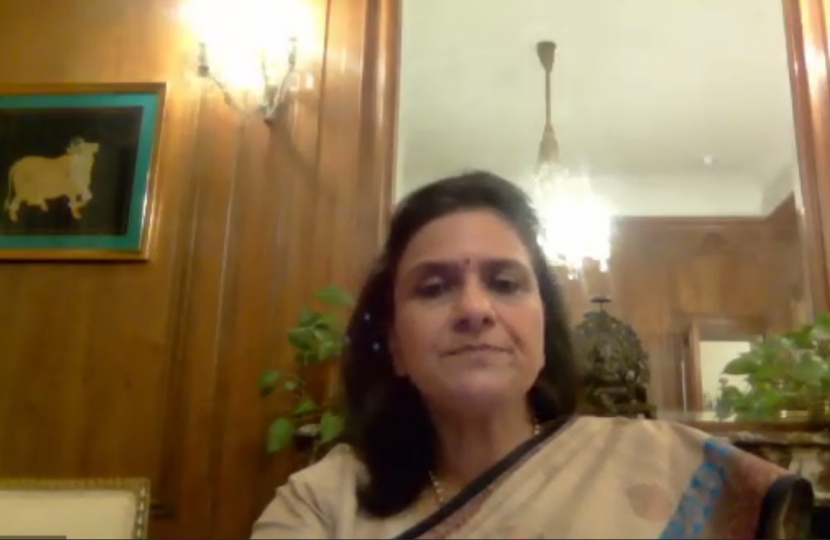 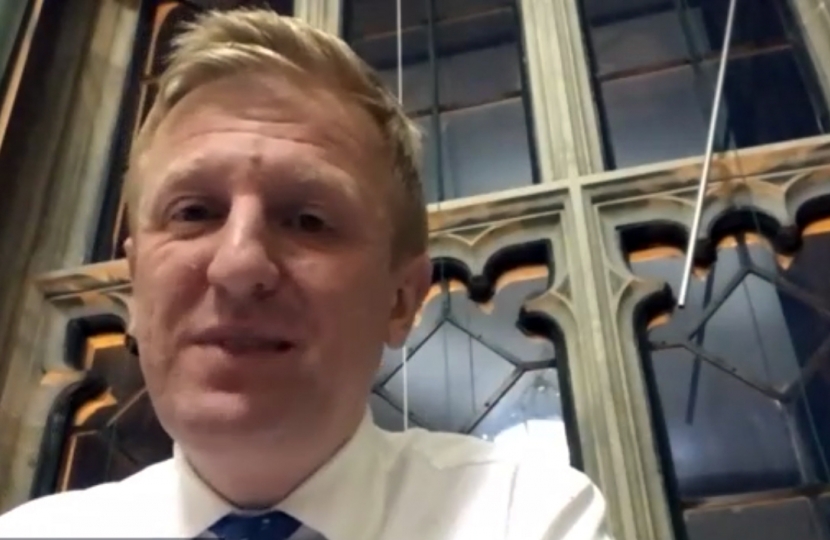 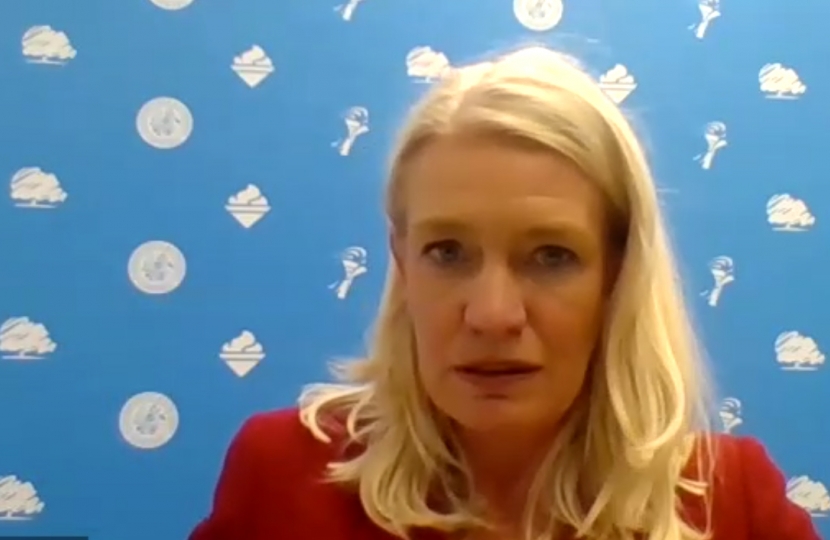 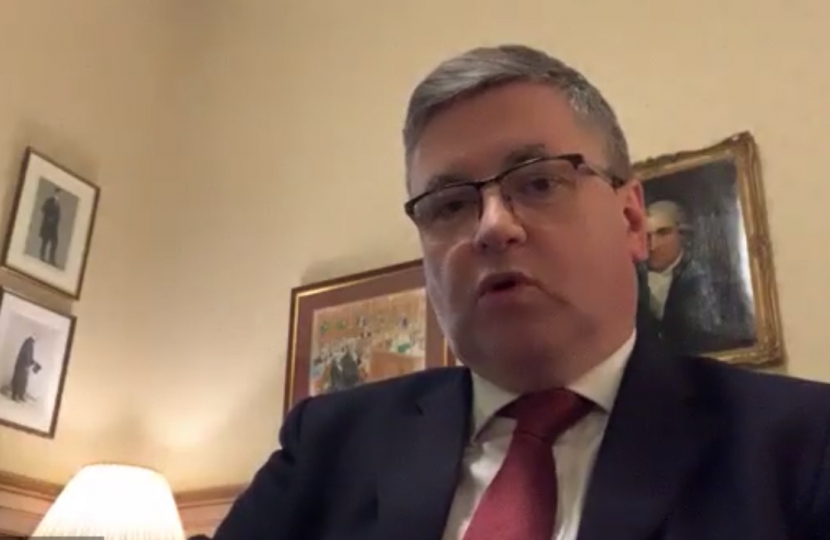 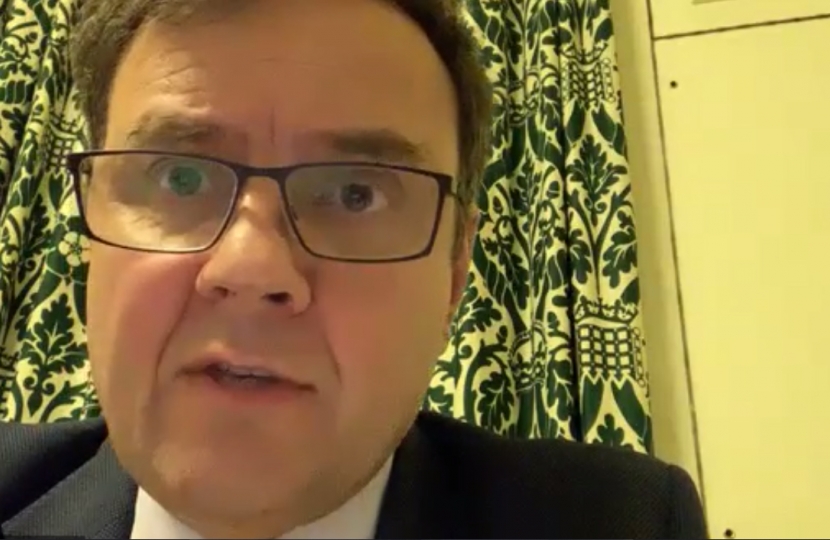 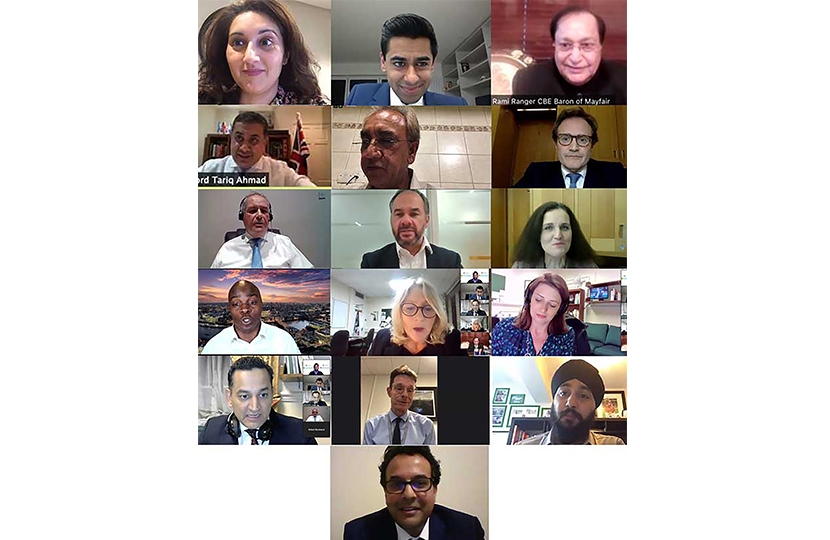 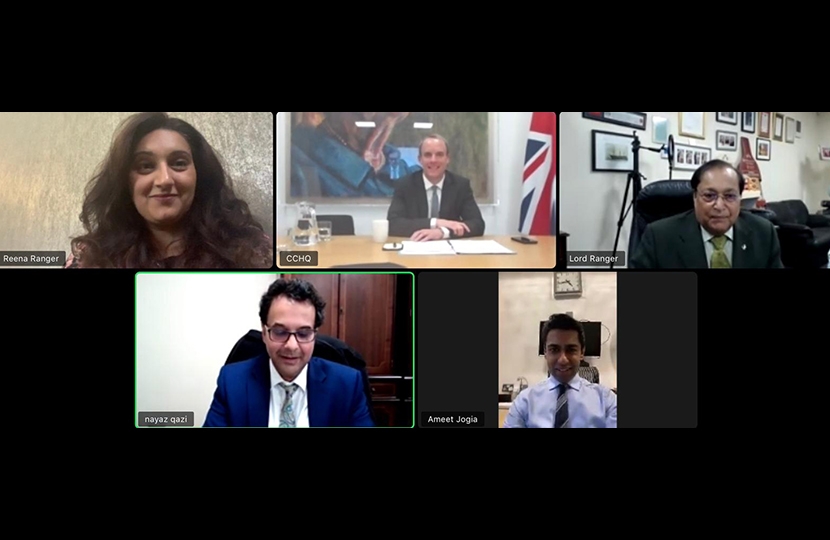 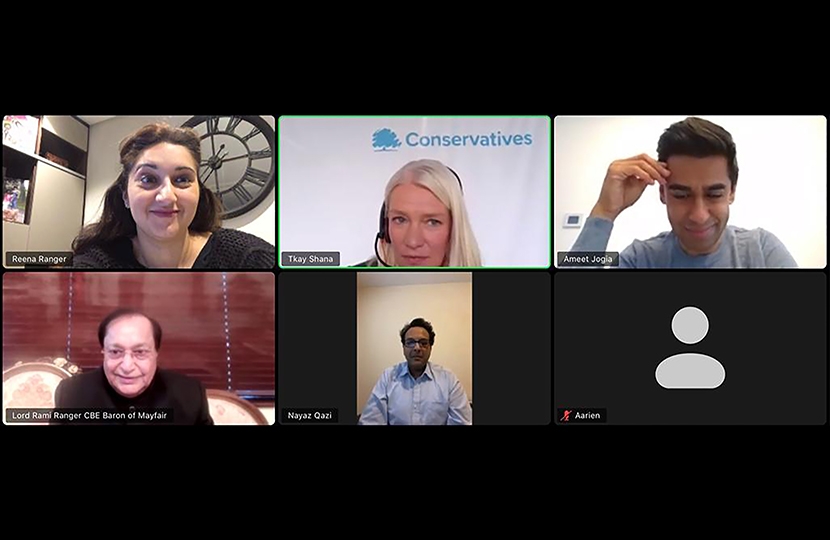 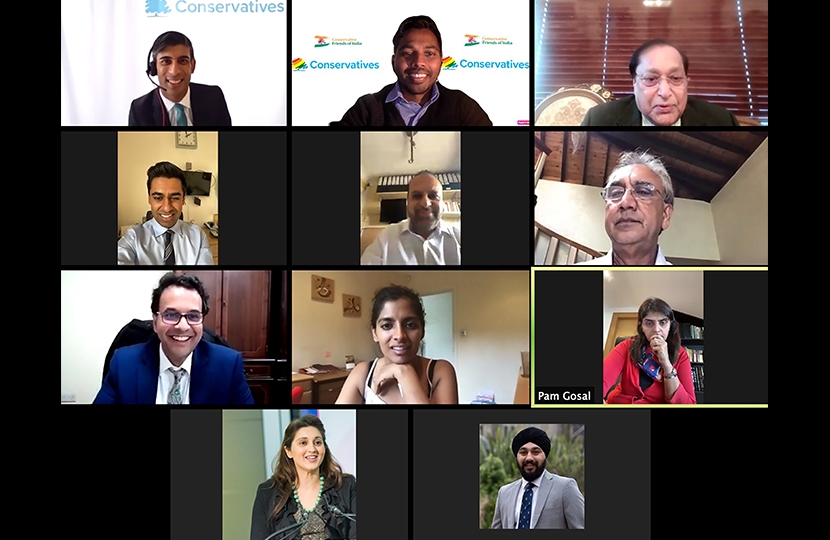 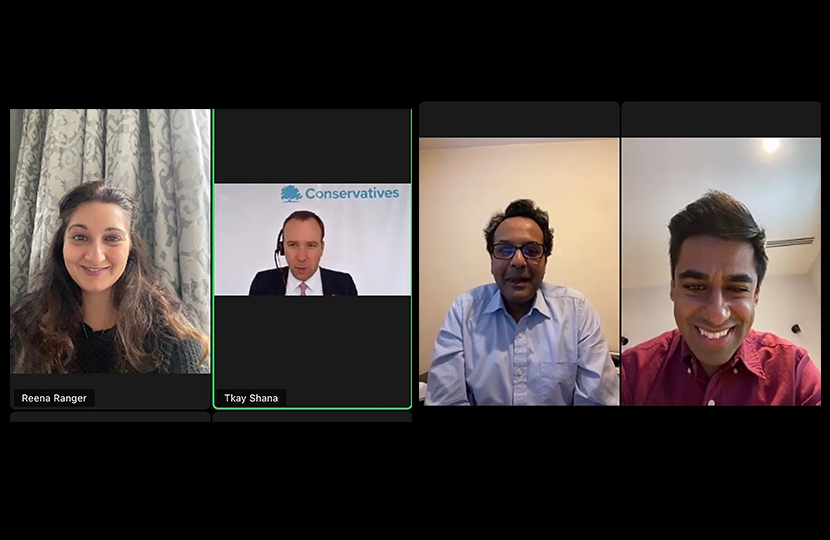 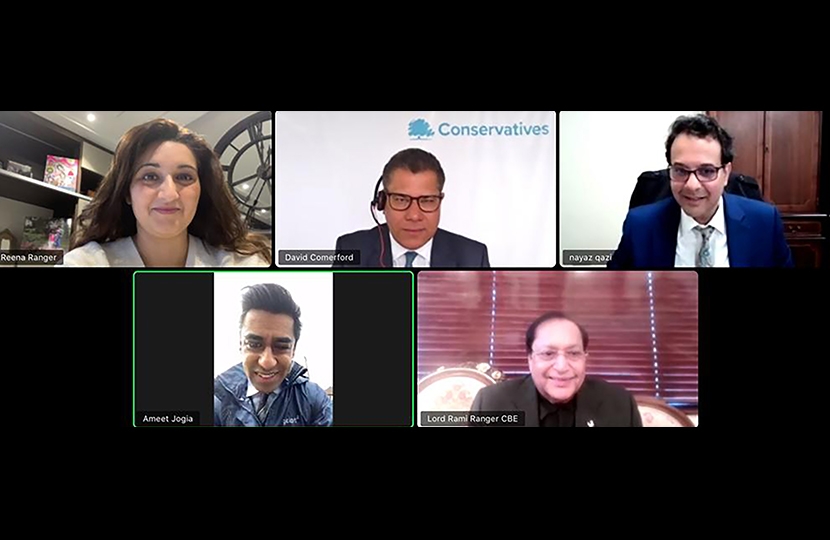 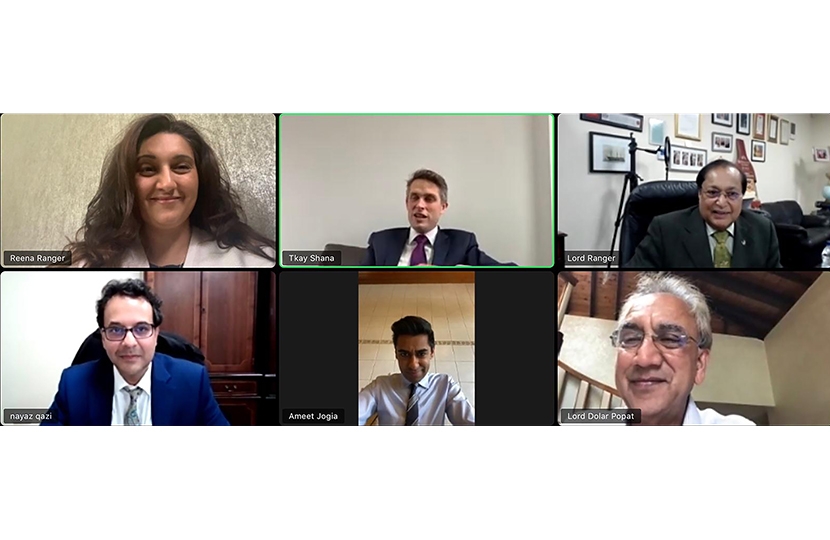 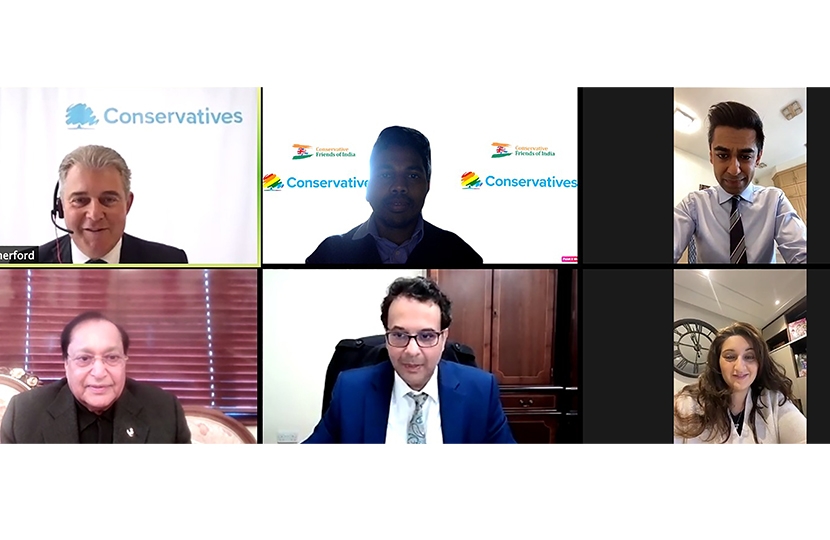 It was the first CF India Conference Reception for Her Excellency, the New High Commissioner of India to the UK, and Cllr Reena Ranger OBE and Cllr Ameet Jogia as the newly appointed Co-Chairs of the Conservative Friends of India.

The Guest of Honour, The High Commissioner H.E Gaitri Issar Kumar said, "India greatly values the engagement with the UK and the signals from the UK Government under the current Conservative Party leadership". The High Commissioner also conveyed that the Indian government looks forward to the possibility of The Prime Minister Rt Hon Boris Johnson visiting India in the new year and looked forward to dialogue with the Party through the Conservative Friends of India."

Patron and past Co-Chair of CF India Lord Rami Ranger CBE echoed the sentiments of Lord Popat, and said "How proud he was of the work being carried out by the new CF India Co-Chairs Reena and Ameet”. Lord Ranger also highlighted the need to support London Mayoral candidate Shaun Bailey to bring about change in London, "we need a mayor that has "empathy for Londoners".

Chief Guest Secretary of State for Digital, Culture, Media, and Sport The Rt Hon Oliver Dowden MP thanked the High Commissioner on behalf of the government and spoke of the great synergy in the relationship the UK enjoys with India and how both the UK and India as global leaders in Tech have great opportunities in developing the collaboration further. He praised the contribution of the British Indian community, their contribution from the hundreds of councillors, the House of Lords, and the Cabinet. In closing, the SoS' said "He looked forward now we have left Europe to strengthen the special relationship with India".

The Chairman of the Conservative Party, The Rt Hon Amanda Milling MP, thanked the High Commissioner for her support. Amanda was delighted to announce how this year's conference attracted 20,000 members at the virtual conference. Amanda gave a "huge thank you to Co-Chairs Ameet and Reena for the great work they are doing and thanked Lord Popat, Lord Ranger, and Nayaz for the fantastic support". "The hard work of CF India was instrumental in supporting the candidates, and sitting MPs get elected and re-elected".

Secretary of State for Justice and the Lord Chancellor The Rt Hon Robert Buckland MP, said the British India community share the same common values with the Conservative Party. In closing, Robert said, "It is with this deep sense of pride I am at today's event, my very best wishes to CF India".

Minister of State for Trade Policy, The Rt Hon Greg Hands, spoke about recent initiatives between the UK and India in developing the trade partnership, and how the JETCO meeting, provided the opportunity to review the current market barriers."

Shaun Bailey, the London Mayoral Candidate, said the mayoral elections provide a "generational opportunity to remove Sadiq Khan, the election is not just about the city we live in, it is about the future of our children, housing, business and making London a safer place".

Minister for London and Small Businesses Paul Scully MP, lauded CF India, and the Indian diaspora for working day and night around the country to help the Party secure the record success, in particular, the marginal seats.  In closing, he said, "The support of British Indians is paramount "The Indian community is helping us through Covid, the community is there to get us through the tough times and to keep us all going".

Andy Street CBE, Mayor of the West Midlands, thanked the Conservative Friends of India, stating "I would not be mayor without the help of British Indian community".

Chairman of the Foreign Affairs Committee Tom Tugendhat MP said there is "No way of talking about British history without Indian history, there is no way to split both great countries, we are far to close". In closing, he said how proud he was to be a Patron of Conservative Friends of India.

Padma Shri Bob Blackman MP praised the work of CF India and how the Reception was a great way to celebrate the special relationship with India. The contribution of the Indian diaspora is immense and now is the time to formulate a trading partnership with India. Bob reconfirmed that "the policy of the Conservative Party is that the matter of India's borders is an internal matter and that Jammu & Kashmir is part of India".

The Rt Hon Theresa Villiers MP gave a huge thank you to CF India for the "support and incredible hard work over the general election, and without this hard work I would have struggled to gain a majority". Theresa paid tribute to the hard work and dedication of the British Indian community over the Covid pandemic.

Gagan Mohindra MP said, "UK and India are natural partners. I applaud Reena and Ameet for this great work and how you have taken CF India to the next level ".

Joy Morrisey MP "Thanked the British Indian diaspora and the Conservative Friends of India for the campaigning and financial support to candidates across the country".

Suzanne Webb MP, referencing quotes from Shri Mahatma Gandhi, said "be the change you wish to see" and how important that still resonates today.

West Midlands Police and Crime Commissioner candidate Jay Singh Sohal said "how he looks forward to working to make the streets of the West Midlands safer, bringing down crime to make communities safer and this can be achieved with the support of CF India in the upcoming elections".

Director of CF India, Nayaz Qazi in giving the vote of thanks, thanked the High Commissioner, Secretaries of State, The Chairman of the Party, CF India Parliamentary Patrons, CF India Parliamentary Vice-Chairs, MPs, its members, and the CF India Co-Chairs Reena and Ameet and how the Party's engagement is expanding under their Chairmanship. Nayaz said in closing "The special relationship between the UK and India is deep-rooted in history and is like two threads of the same tapestry".