Zac Goldsmith was born in 1975, and grew up in Richmond where he has lived for most of his life.

He was first elected MP for Richmond Park and North Kingston in 2010 and re-elected in 2015.

He has been voted among the top MPs for engagement with his constituents, and has won numerous awards for his campaigns in Parliament.

In 2016 he stood as the Conservative Party’s candidate in the London Mayoral election. He received just under a million votes, but lost the election to Labour.
Later that year he resigned as an MP in protest against the Government’s decision to expand Heathrow airport – something he had promised residents he would do before he was first elected. He stood in the subsequent by-election as an Independent and narrowly lost to the Lib Dems.

In 2017 he was again elected MP for Richmond Park and North Kingston as the Conservative Member of Parliament.

Before becoming an MP, Zac directed and edited the Ecologist Magazine for a decade, and received Mikhail Gorbachev’s Global Green Award for ‘International Environmental Leadership’.

Outside of his work as an MP, Zac continues to raise significant funds for a wide range of conservation and environmental campaigns. 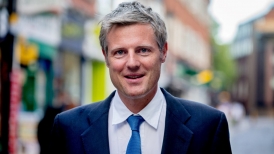