Lord Rami Ranger is a founding member of the Hindu Forum of Britain, and Chairman of the Pakistan, India & UK Friendship Forum, and the British Sikh Association. His company, Sun Mark Ltd, is the only company in the UK to have awarded 5 consecutive Queens Awards for the enterprise.

He is also the Patron of the Punjabi Society of British Isles, Combat Stress and Fellow of the Prince’s Trust. As a key supporter of youth and skills development, Rami is a member of the government's Apprenticeship Delivery Board and an Ambassador for the Food and Drinks Industry in the development of apprenticeships and job creation throughout the UK.

In 2005 he was made a Member of the British Empire and in 2016 the Commander of British Empire for his services to British Business and the Asian Community.

Rami recently chaired the first Conservative Commonwealth dinner held over the week of the Commonwealth Heads of Government Summit in London. 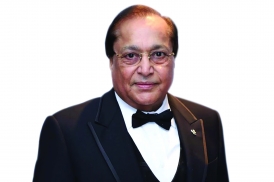