Dr. Prem Sharma, OBE has worked tirelessly in providing a platform for the Asian people. He is a pioneer in many ways and took initiative in promoting young Asian people in many areas most notably in politics. The result of which you see today, a dinner, in honour of the first Asian Home Secretary of State Rt. Hon’ble Sajid Javid, MP and many other Asians who are now MP’s and Ministers.

Dr.Sharma was the first Asian to be elected Chairman of a Conservative Association, Area Chairman, National Executive Council and One Nation Forum (Campaign).

Dr.Sharma is most notably known for fostering Peace and Harmony amongst various communities for over 4 decades. He has been recognised by HM The Queen for his outstanding work.

His focus is now on Peace promotion between communities and Nations.

In October 2017, The Royal Society of Medicine acknowledged Dr. Sharma’s contribution to Healthcare, community relations and Peace with a special inscription on the “Wall of Honour” in the central atrium of its building In Wimpole Street. 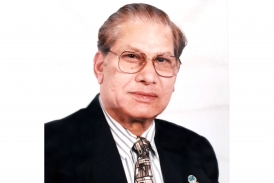