Resham Kotecha: Why I Back Zac 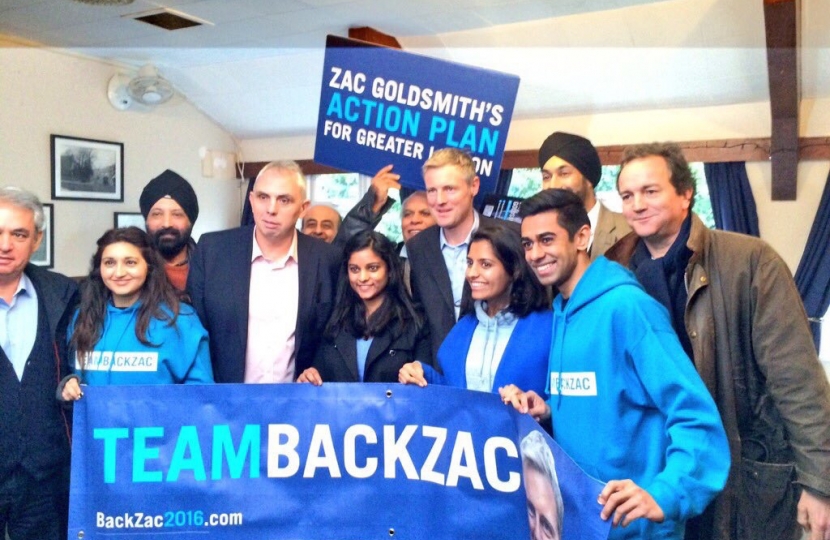 Resham Kotecha is an Economic Advisor & Researcher and the COO of Women2Win. She was the Conservative Party's Parliamentary Candidate for Dulwich & West Norwood in the General Election in 2015.

Under Boris Johnson's leadership, London has become the world’s leading city. The incumbent Mayor has attracted investment and encouraged business, which has led to more jobs and a more prosperous city. He has ensured that crime continues to fall, and he has also secured the necessary funds to improve transport and infrastructure.

In short terms, Boris has done a great job. It isn’t finished yet, though, and I believe that Zac Goldsmith is the right man to continue his enormous legacy.

"Zac fights for those he represents"

When considering what I want from a Mayor of London, I see before me a principled advocate fighting for my best interests. Zac has a long-standing record as a passionate campaigner on the issues that matter, always fighting for the interests of those he represent, even if it has meant defying party leadership. That type of integrity and passion is important, and the voters know it. Just ask Zac’s Richmond constituents, who rewarded him for his services to the community with the largest increase in majority of any incumbent MP of any party. Compare that with Sadiq Khan, whose record has been particularly unimpressive when it comes to acting with conviction. He once supported mansion tax but now says he will oppose it. Similarly, he once led Labour’s campaign for a third runway at Heathrow, but now he opposes it.

Zac has fought consistently for a proper recall mechanism for MPs; he has asked for a new relationship with Europe; and he has demanded a stronger focus on green issues. These are all matters that resonate with a wide range of voters from across the political spectrum. For London to thrive, we need a Mayor who can engage with all Londoners. Zac’s ability to work with and for people regardless of their background or political beliefs will be a particular strength, especially given that London depends on the Chancellor for 93% of funding. In sharp contrast, Khan has been particularly partisan and has no record of, or interest in, working with other parties.

Along with a commitment to double house building by the end of the Mayoral term, Zac’s plan to implement a “Londoner First” rule (whereby housing built on Mayoral land will be sold only to Londoners for the first year) will help increase opportunities for myself and my generation to buy a property in the city we love.

Aside from the obvious issues of attracting investment and boosting employment, Zac has my vote based on his policy for the tube. Along with millions of others of hard-working Londoners, I have been frustrated by tube strikes on numerous occasions. Zac is fighting for TfL to be classified as an essential public service so that a strike can only go ahead if more than 40% of the workforce support it. Khan, with £100,000 of his support coming from the unions, is unlikely to stand up to the stronghold unions have over our much relied upon transport system. Given that the Government has agreed to put suburban rail services under Mayoral control, it is particularly important to have a Mayor who will not bow to the demands of their paymaster, which I believe Sadiq would. As the Parliamentary Candidate for Dulwich & West Norwood in the 2015 General Election, I know how important this change in rail providers will be for my former constituents and I am looking forward to having a man like Zac running transport in South London.

"Zac will champion London - at home as well as globally"

I believe London is such a great city because we are free to go out, earn money, start businesses, work hard and have fun. The last thing that London needs is interference from a Union-led, anti-business and high tax Mayor.

Zac’s record as a strong and passionate campaigner means that he is the perfect man to champion London - both in the UK and globally. Zac’s sincere desire to serve those he represent is the real reason that I hope he becomes our next Mayor of London.