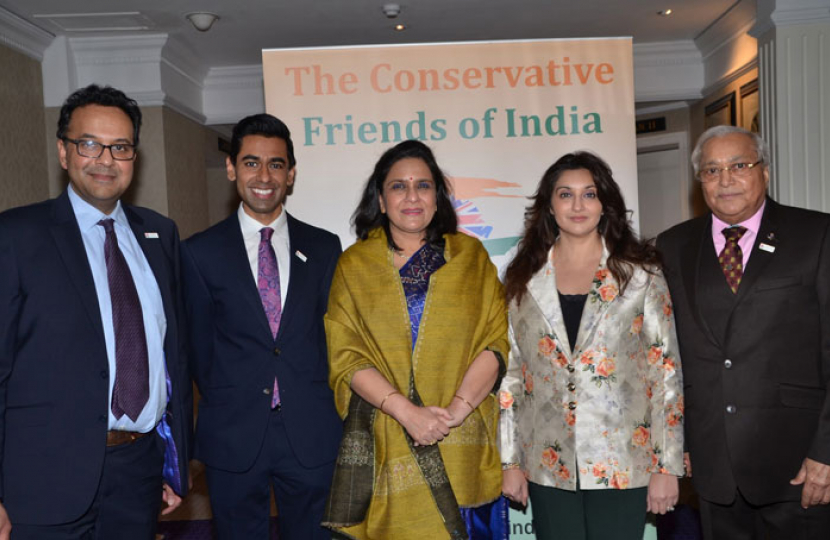 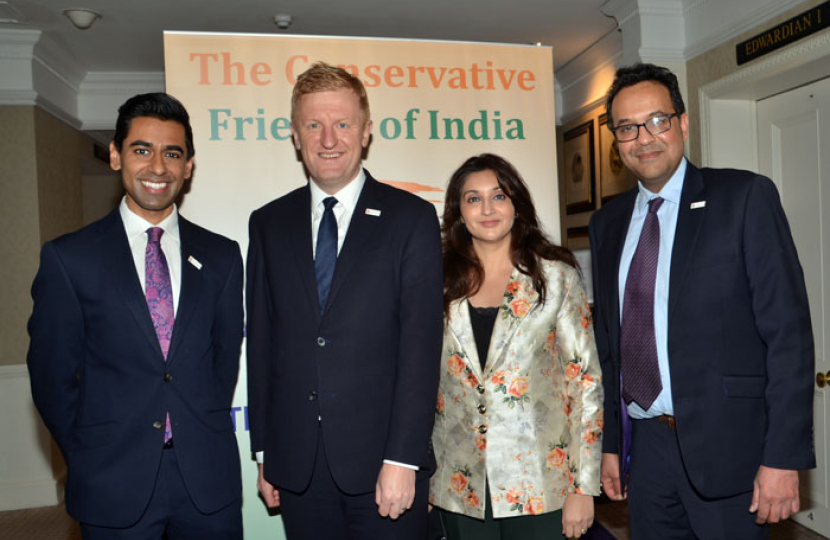 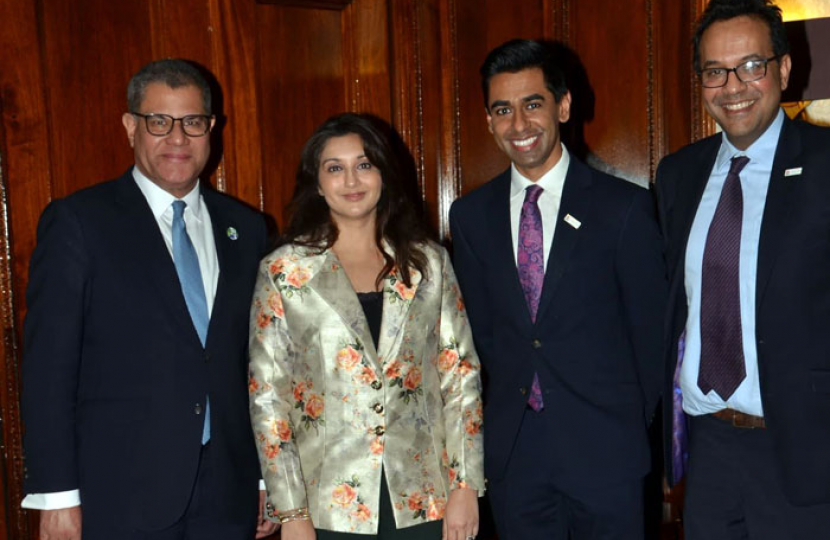 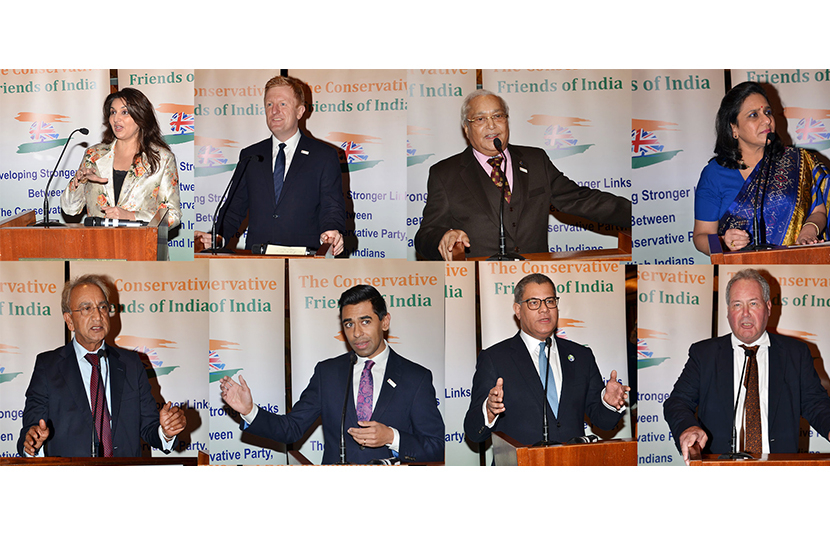 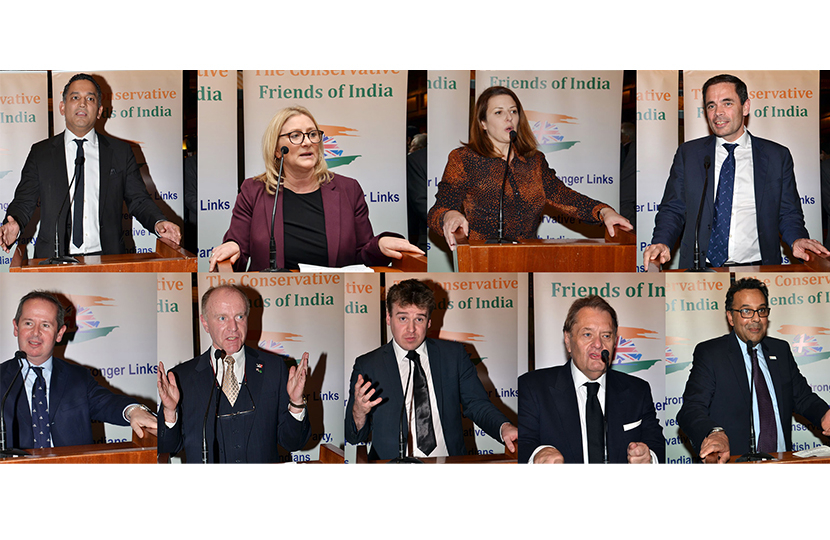 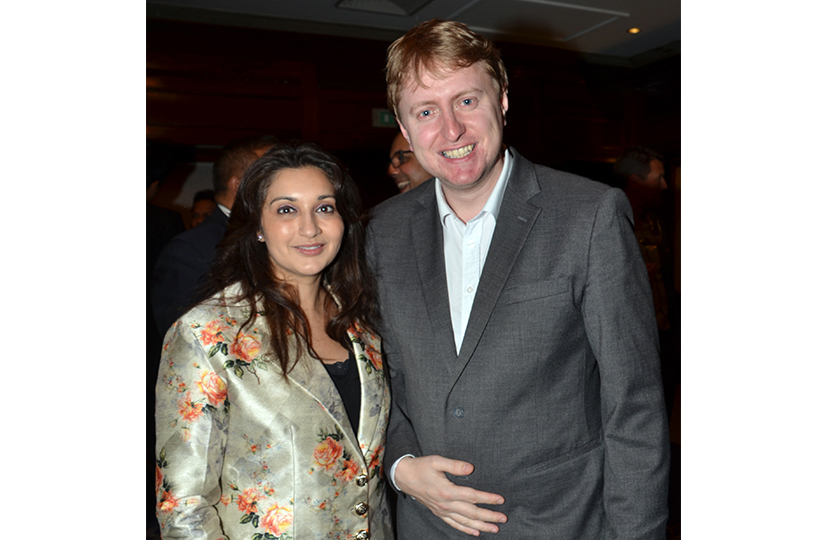 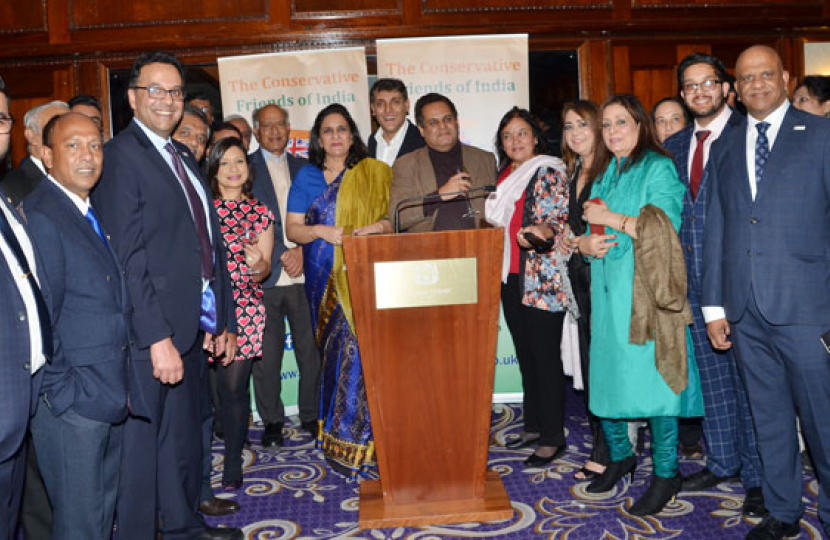 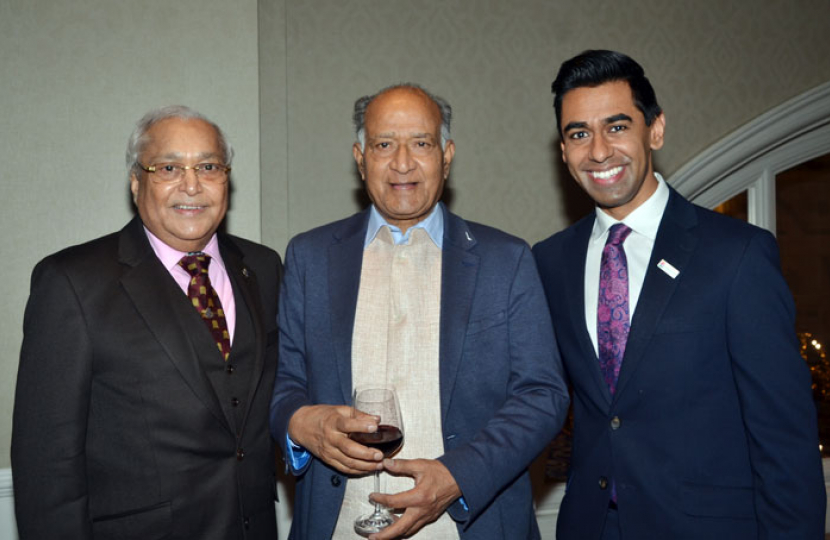 The Conservative Friends of India celebrated Diwali with its annual Reception at the prestigious Taj Hotel in Buckingham Gate London on the 23rd November. The Reception is part of CF India’s UK wide Diwali Receptions, an initiative of CF India Co-Chairs Cllr Reena Ranger OBE & Cllr Ameet Jogia. The Diwali Reception in Scotland was held in Glasgow, Scotland, in conjunction with the SCABE on 25th November.

In London at the Taj Hotel, CF India was honoured to have the presence and support of the High Commissioner of India, H.E Gaitri Issar Kumar as the Chief Guest and Guests of Honour The Conservative Party Chairman Rt Hon Oliver Dowden MP and COP 26 President The Rt Hon Alok Sharma MP.

The guests were welcomed by Co-Chairs Reena and Ameet; introducing The Party Chairman The Rt Hon Oliver Dowden MP. The Pary Chairman “thanked the High Commissioner for India for joining CF India to celebrate Diwali, CF India for organising the Diwali Reception and to the British Indian community for their unstinting support for the Conservative Party”. The Chairman also highlighted that “ The shared values of UK and India and its people are to be celebrated.

COP 26 President The Rt Hon Alok Sharma MP said, “ He was proud of his long association with the Conservative Friends of India and the importance of the organisation, and he paid tribute to its work”. At today’s Diwali Reception and seeing members of CF India of all communities from across the country is testament to the organisation.”

The Chief Guest, The High Commissioner of India, HE Gaitri Issar Kumar, said, “ She was delighted to join everyone today and valued the closeness with the diaspora in the UK. I thank the Hon Prime Minister Boris Johnson for his Diwali wishes. Today was about Celebrating the Festival of Light and the closest association between India and the UK. I wish all the members, Parliamentarians, an auspicious New Year. And I would like to thank Co-Chairs Cllr Reena Ranger, Cllr Ameet Jogia, Director Nayaz Qazi, Parliamentarians, Bob Blackman MP and the Rt Hon Theresa Villiers MP, Lord Ranger, Baroness Verma and Lord Popat for being a voice for India in Parliament. India is working closely with the UK for a better world in health care, climate action, trade & prosperity, defence & security and connectivity. ”

Sir John Hayes MP said, “We must celebrate the difference India, and the British Indians have made to Britain. The UK & India relationship is shaped by the past and framed by the future; long may the countries proper, long may CF India thrive. CF India plays a vital role in the relationship between the UK & India.”

Founding Chairman Lord Dolar Popat said he was immensely proud to see how CF India had developed from when he had started the organisation and how because of CF India, at each election, there was an increase in the number of British Indians voting for the Conservative Party and becoming more involved in standing for political office.”

Parliamentary Patron Bob Blackman MP said he “ looked forward to the opportunities to improve security and defence as well as trade and a wide-ranging cooperation, the key issues of China and Pakistan need to be addressed for the benefit of India and the region.” Bob closed by saying, “ He looked forward to visiting India very soon, which will be the first time since being honoured to the Padma Shri from the President of India, as the first non- India origin awardee.”

David Simonds MP, said, “ As a new member of Parliament, in a constituency with a large British Indian population, I was struck by the support by their support over Covid to all, the work, the fundraising and community spirit, I convey my thanks to the British Indian community.”

Joy Morrisey MP thanked CF India and the members and wished everyone a Happy Diwali, and paid tribute to the contribution of the British Indian community.

Patron Lord Rami Ranger CBE paid tribute to the Indian High Commissioner HE Gaitri Issar Kumar and asked all the guests to say thank you with a rapturous round of applause. Lord Ranger finished by encouraging CF India members and the diaspora to take a greater role in democracy by becoming more politically and publicly involved, which will benefit not just the present British Indian community but also the future generations.”

Gagan Mohindra MP “ Said it was an immense honour to be part of CF India and celebrated the great work of CF India” In closing, Gagan said “ The Party and the British Indians stand for the same values, and I urge you to support the Party, we have upcoming Parliamentary By-elections and local elections next May, it is imperative that we get out there and campaign to elect the Conservatives, the natural choice for British Indians.

Suzanne Webb MP “thanked CF India and the British Indian community for all the work they do and how this benefits Britain”. Suzanne spoke about the “exciting opportunities in the bilateral partnership the UK and India and how the 2030 Roadmap for the India-UK future relations, was a perfect framework to achieve this “.

Maro Loghi MP said, “ This was the first time in two years that we have been able to come together to celebrate Diwali, the festival of light. Diwali is the triumph of light over dark, and the British Indian community played a critical role in helping Britain get through the darkness of Covid”.

The vote of thanks was delivered by CF India Director Nayaz Qazi; Nayaz thanked the Indian High Commissioner HE Gaitri Issar Kumar for the unstinting support and that the support was central in the success of CF India, the Parliamentary Patrons, Parliamentary Vice-Chairs, the Members of Parliament at the Reception, the CF India members and to the CF India Co-Chairs for their great work in strengthening CF India.