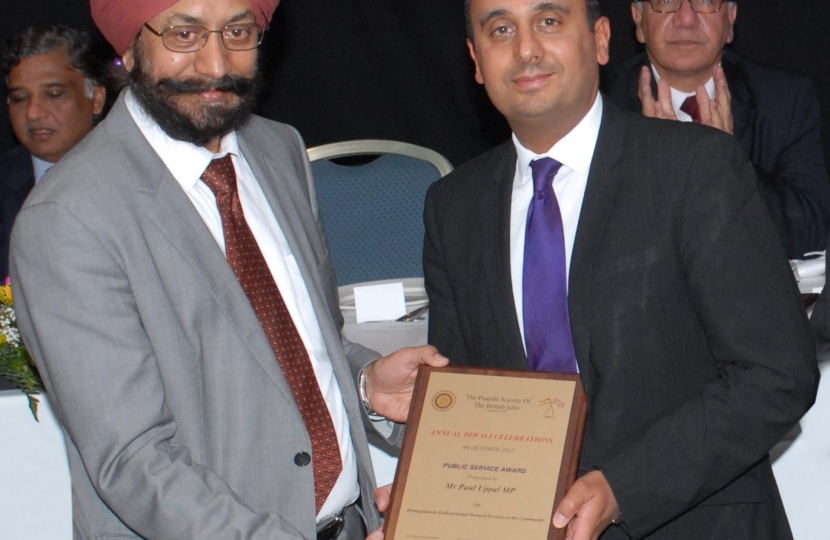 Conservative Friends of India is delighted to announce that Paul Uppal MP, Conservative member of parliament for Wolverhampton South West and CF India board member, was honoured twice earlier this month - with the Public Service Awards from the Punjabi Society of the British Isles on 6 October 2012, and with the Peoples' Choice Award at the international Sikh Awards in London on 21st October 2012.

The Punjabi Society of the British Isles has an 85 year history, with a mandate not only to celebrate Punjabi culture and heritage but also to enrich Britain’s cultural and economic life. The awards ceremony took place after its Diwali dinner and dance, which also raised money for research into Alzheimer's disease.

The International Sikh Awards recognise Sikh contributions and excellence in a variety of fields. Nominations were received from around the world, culminating in a ceremony attended by 750 guests including the Rt Hon Baroness Sayeeda Warsi, Charlotte Leslie MP and Paul Uppal MP.

Speaking to CF India about his awards, Paul said,

'At a time when politics is not held in the greatest esteem by the British public, it is a real honour to have been presented with the Public Service and Peoples' Choice Awards. Just as the Sikh community has always supported me I will continue to champion the role they play in our great country.

'I also hope this award sends out a message to anyone considering entering politics, whatever their background, but especially Black and Minority Ethnic candidates, that you if you step forward, you can make a difference.'

For more information about CF India, or on Paul Uppal MP's awards, please contact CF India Director, Asheem Singh, on asheem.singh@cfindia.co.uk or on 0207 9848050.