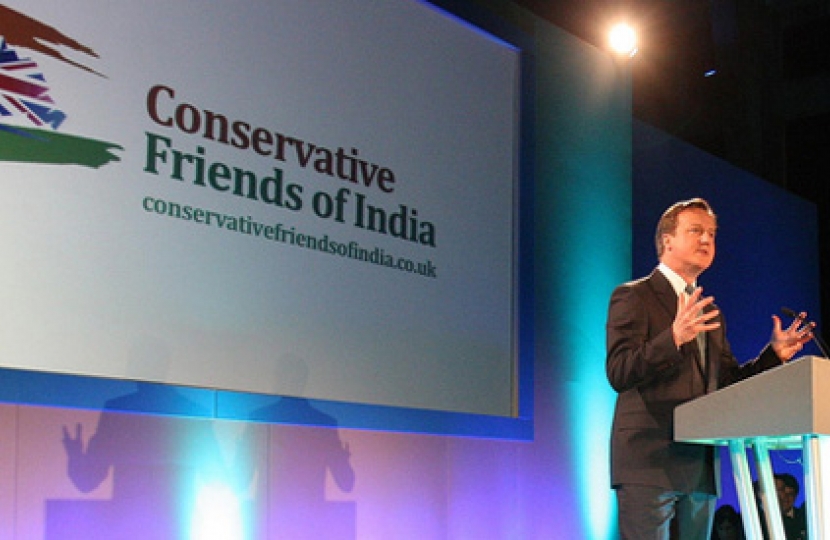 I am delighted to welcome you to today’s lunch and to support Conservative Friends of India in its work strengthening the relationship between the Conservative Party, the UK Indian Diaspora and India.

I would also like to thank Conservative Friends of India for all the help, hard work, support and generosity you have given our Party over the past years. This valued support has enabled us to continue making the difficult decisions necessary to put our country back on track and, by working through our long-term economic plan, deliver the strong, responsible leadership Britain needs.

Only recently we witnessed a momentous event in India’s history. Narendra Modi achieved a landslide victory as India demonstrated the power of democracy to the rest of the world. I am looking forward to working with his government. This week, a key delegation of British Ministers, led by the Foreign Secretary and the Chancellor of the Exchequer, have been in India to bang the drum for stronger economic ties between our two countries. We will never shy away from doing so. I am proud as Prime Minister to have made a personal commitment to strengthening UK-India relations. I firmly believe that British Indians – who already bring so much to our country – can play a vital role in that endeavor, as we look to forge one of the great partnerships of the 21st Century.

During my three visits to India as Prime Minister, I have been inspired by seeing for myself the depth and breadth of talent, spirit and aspiration of people from the sub-continent. This is also something that I see in the 1.4 million British Indians here in the UK. Over the past half century, hard-working, ambitious Indians have contributed immensely to building the fabric of Britain as we know it. The community has done this country proud, leading in fields as diverse as art, business, construction, health and education. Indeed, we have fantastic British Indian Members in both Houses of Parliament and across the wider political landscape too.

I want to see this level of participation in politics increase. I mentioned during my superb visit to Neasden Temple last Diwali that one of my wishes this year was for the British Indian community to become a stronger presence in Britain. We need the knowledge and expertise of the Indian community in public life. Just as the UK ought to build on its special relationship with India, I am committed to the Conservative Party working hard to build its partnership with British Indians over the coming years. I believe that the Conservative Party is the natural home for many British Indians. Conservative Friends of India is one of the vital bridges between the community and our Party, and I congratulate the team for their engagement and campaigns since 2012.

So thank you for everything you have done and continue to do for our Party and our country. Let’s keep up the momentum and fight with every ounce of energy for a Conservative majority next May – a majority that is within our grasp – so that we can continue to strengthen the UK-India relationship and build on the important work carried out these past years.

With that I mind, this comes with all my thanks for your incredible support, and my very best wishes for an enjoyable lunch.