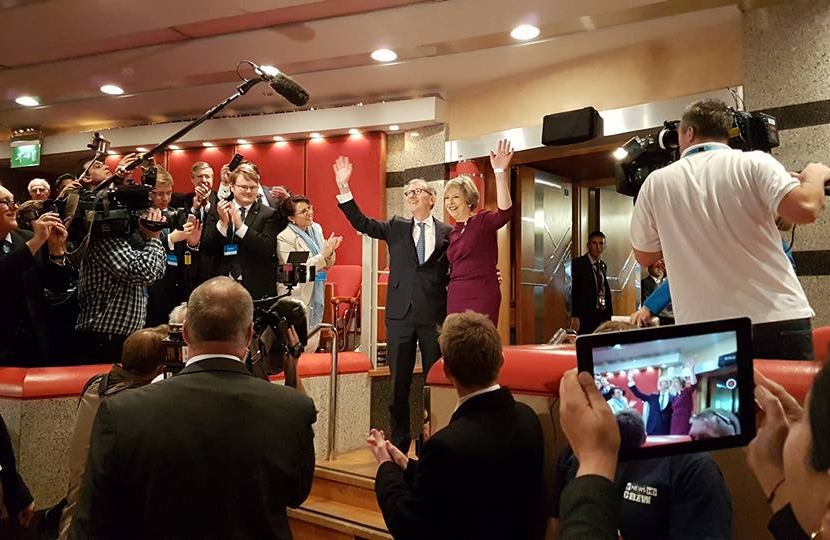 Jeevan graduated from the London School of Economics with a Masters in Comparative Politics, specialising in counter-terrorism and political violence. Regular tweets can be found @jeevanvc.

I enjoyed watching the Prime Minister’s speech at the Conservative Party conference. It was a decidedly fascinating insight into the mind of Mrs May, demonstrating her political acumen and great ambition for Party and country.

It was good to see an anti-Semitic and divisive illiberal organisation like today’s Labour being put in its place as the ‘nasty party’. Better still was the emergence of the strategy that Mrs May clearly intends to pursue. The future portends a Conservative Party that is a bit more interventionist in the economy than Mrs Thatcher, while being resolute on the control of immigration and the need to commit to Brexit after the people’s mandate on June 23. Last year, I wrote that David Cameron had parked the metaphorical Tory tanks on Labour’s lawn. Mrs May has now brought an entire army along encamped firmly on Labour territory. The social market model she spoke of will bring many challenges but if implemented firmly and effectively can transform the political landscape - to the great advantage of the Conservative Party.

It has long been a truism that he (or she!) who holds the centre ground can win general elections. The outcome of the last four elections demonstrates this. Thanks to the success of Lady Thatcher over 30 years ago I suspect the political centre in Great Britain is a tangibly closer to right than to left (which sums up Labour’s problems in a nutshell). This is not going to change any time soon. What Mrs May has done is to commit to gaining the votes of those people that arguably felt disenfranchised and left behind, who voted to leave the European Union. Imagine, the Tories are now going earnestly for the working class vote! This is a unique opportunity thanks to the changing political circumstances.

Contrary to the belief among some, the centre ground has not collapsed. It has merely shifted and changed. Britain is still the eminently sensible, moderate country it was before the referendum. There is open discussion of the need for controlling the nation’s borders, which is not racist but pragmatic and a basic, vital function of government, especially at a time when the world outside is unstable and far from free of threats. Provided that the immigration debate steers clear of ethno-racial overtones, focusing instead of the impact on services, housing, social cohesion and national security it is possible to have a sensible discussion on it. This is what Mrs May has enabled with her policy shift. The public mood is now anti-immigration, which is why it is important to separate racism from scepticism and opposition to immigration. They are not always the same thing.

Most basic to PM May’s ideas is the concept of a more interventionist government that is willing to fight on the side of the dis-empowered, those who are struggling to get on the ladder and improve their position in society. From the housing market to employment to education there are many areas where ordinary working British people are struggling. So this ambitious Conservative government will leave behind the pure ‘laissez-faire’ approach of letting the invisible hand of the market guide key policy decisions. This is not socialism, contrary to what some might say. It works very much in a market capitalist framework, and it still rewards hard work and determination. This is the social market approach. The intention is to further develop the ‘spirit of citizenship’ which Mrs May mentioned in her speech. For to emphasise the development and employment of young British talent as opposed to cheaper overseas alternatives.

Above all this is a policy thrust which is guided by ideology, opportunity and empathy. It is a move, not so much to expand government as it is to make it efficient in responding more to the needs of ordinary people. The collapse of Labour as an electable force and the exposure of the rank amateurishness of UKIP post-Farage have thrown open the doors of opportunity. The future heralds the possibility of massive Conservative victories based on the working people’s votes as much as anything. A return to the massive landslides of the Thatcher years are the stuff of Tory fantasy no more. Political outreach is about appealing to the greatest mass of people. In grabbing the centre ground in this way, Mrs May is building the foundations of a new period of political dominance. A political system which is somewhat different to previous Conservative governments but not in opposition to them. A system which reforms and efficiently intervenes to ensure that injustices are corrected to the extent possible.

It will be interesting to see how things develop from here. Unique political circumstances ensure the Tories have the space and the time needed to generate change for the better in Great Britain. Mrs May has been given a great opportunity to create a society that is both just and aspirational. This inspiring Conference speech has demonstrated that she is on the way toward grasping it in both hands, to the betterment of both Party and Country.