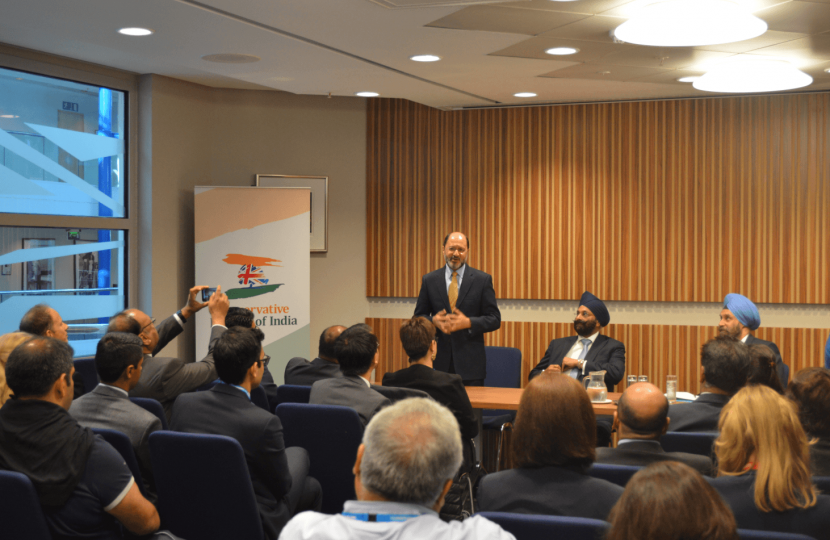 It was a pleasure to join a full house at this year’s Conservative Friends of India (CF India) party conference fringe event, which saw an excellent discussion of UK-Indian relations between the former High Commissioner of India, His Excellency Navtej Sarna, Shailesh Vara MP and Co-Chair of CF India, Ranjit Singh Baxi.

Many topics were covered, from our shared commitment to democracy, to the cultural and family ties which bind us, but the biggest topic, not surprisingly given June’s momentous vote, was that of trade between our nations.

In recent months much has been written about the downside risk of departure from the EU, in particular the possible downgrading of free access to European markets. As a business owner and exporter, I share these concerns and wish to see that ultimately we reach an agreement with the EU with minimal tariff and other barriers to trade.

Nonetheless, such concerns should not come at the exclusion of the upside opportunities to global trade from our departure from the EU. As such it was refreshing to witness such a positive and optimistic discussion in the room focussing on the potential and the desire from both sides to see a UK-Indian trade deal concluded as soon as possible after our exit in 2019.

This optimism rings true with the politics of the situation, with Prime Minister Modi committed to further liberalisation of the Indian economy, and with all Conservative MPs – both Remainers and Leavers – firmly of the desire to see our departure from the EU lead to more trade and less protectionism.

Indeed, a free trade agreement with India, one of our oldest trading partners and now one of the world’s largest economies, must be a top priority of the Department for International Trade, because we are currently punching well beneath our weight in terms of exports to India. While we have significantly increased the value of exports of goods and services to India since 2010, India is still not in our top 10 nations to export to, nor are we in its top 10 of economies it imports from. Compare this to Indian exports to the UK, where we are its 5th largest export market.

Increased UK exports will not just benefit British companies, but also Indian businesses and consumers, who would see lower prices from importing UK goods and services in areas in which the UK has comparative advantage.

In should be noted that it is not just a matter of opening access to our exports and reducing tariffs, welcome though that would be, but we also need UK businesses to be supported in making the contacts on the ground in India to foster new commercial arrangements.

Since our Conference event we have seen positive developments in this regard. When Prime Minister Theresa May visited Delhi and Bangalore last month, she took a trade delegation of 30 UK businesses - of all sizes – with her so that they could build up commercial links. Furthermore, her announcement that a further £600 million of new ‘Masala’ bonds will be launched to private investors in London to help finance Mr Modi’s investment in railways and other infrastructure is welcome. This will bring further opportunities for UK plc to sell new goods and services in India alongside these investments.

There is a huge amount to do, but it is clear from our event speakers, and the leaders of both our great nations, that the political will is there to make a success of UK-India trade, bringing jobs and prosperity to both countries.